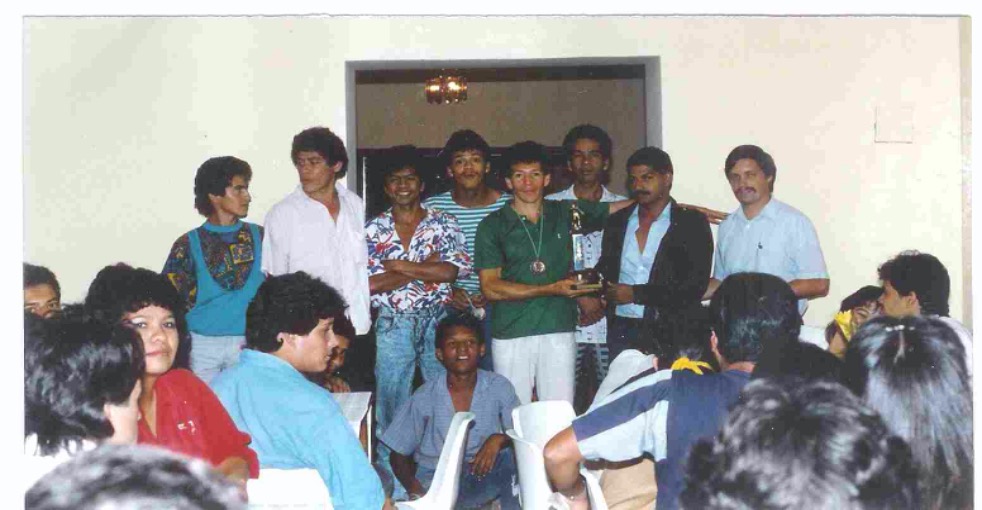 At the first awards banquet for the tournament. Marcos is standing on the right. Alvaro is in the green shirt (center) with the trophy.

I was going for the ball. He beat me to it…and gave me an elbow in the side for good measure.

I had recently arrived in Medellin, Colombia to teach at the Biblical Seminary of Colombia, but my love for soccer and desire to reach out to the young men in our neighborhood brought me to the street that day. Alvaro, the young man with the sharp elbow, did not like North Americans (“gringos, harrumph”) and he made sure that I knew it. In the following weeks, whenever we got out to play, his mission in life, it seemed, was to give me a hard time.

But this all changed when, three months later, I organized a soccer tournament for the guys of the neighborhood at the seminary. Alvaro played and eventually became my strongest supporter, a friend, and, later on, my partner as co-founder of a sports ministry that would make a significant impact in the city of Medellin.

1986 was the year that things came unglued in Medellin. Pablo Escobar’s drug cartel assassinated Colombia´s attorney general in 1984, and so the nation’s president sought retaliation. Escobar reacted by hiring and training hundreds of young men to be hitmen, “sicarios”, and soon Medellin turned into the homicide capital of the world.

“Sicarios” gunned down policemen, judges, mayors, governors, and even presidential candidates. Seemingly everyone in Medellin took up arms. Anyone could be killed for little or no reason at all. Vengeance via the gun became a norm. The average homicide rate was 25 people a day for more than 5 years. By the early 1990s, nobody thought Medellin would survive. And this “culture of death” continued into the 2000´s.

The young men of my neighborhood were involved with a mid-level drug boss who resided close by in a large fortress-like home. Alvaro was one of his favorite hired hands. He wasn´t a drug user, but had no problems making sure that others were.  Alvaro, like the others, was drawn by the easy money and the power that came along with it. These economically poor young men living in the murder capital of the world had nothing to lose.

Besides the fast money, the guns, and the girls, these guys loved soccer. I caught on to this as I joined them on the fields. But I realized that I needed a weekly structured time in order to get up close and personal with them. Thus, the soccer tournament. Being new to this context, I gathered a local pastor/seminarian and some of the young men like Alvaro, and they helped me organize the tournament. The seminary allowed me to use a large barn of a building that was perfect for an indoor futsal (a small-sided variation of soccer) league. By April of 1986 I had 12 teams signed up.

This soccer tournament opened up many opportunities to share with the young participants the fact that God loved them and had a better plan for their lives than working with the drug cartel. Soon after the tournament started, I invited the players to a “chat” on Thursday evenings. Anywhere from 15 to 30 would show up. We mostly talked about spiritual matters, which was abnormal for them. Their lives revolved around selling drugs, making money, and conquering girls. I would insert Scripture into the conversations. For most of them, opening a Bible was a completely new experience. They had a saying: “if you read the Bible, you become crazy.” In spite of this, they kept coming back. After about a year, Alvaro decided “to follow another Boss.”

One Sunday afternoon a year later, I went to visit someone in the neighborhood and happened to walk by Alvaro´s house. He was outside repairing someone´s shoe. This was how he helped his mom with the family budget once he gave up drug trafficking. I sat down beside him and we got to talking about soccer and how we could use the game to reach out to the 14- to 16-year old boys of the neighborhood.  They were at a crucial moment in life, not quite old enough to militate in the Cartel, but very close and very vulnerable.

My unplanned conversation with Alvaro that Sunday afternoon became a pivotal moment in the lives of thousands of young people. We created the Christian Union Sports Club (CUSC).

To date more than 39,000 Colombian young people—many more if family members are counted—have gone through the CUSC program and have heard the Good News of Jesus Christ. Presently, we have 57 full-time staff members, approximately 2,500 weekly participants on 110 soccer teams, a stadium facility for 2,000 spectators, 3 soccer fields, and a retreat center. Along the way, we also started a brownie, cookie, and cake business to give the young men stable jobs outside the cartel. Our business has actually turned into its own cartel (well, not exactly!), producing over 150,000 products a month. This has given us seed money for a number of church plants and a growing ministry in rural Colombia.

Over time, something has happened in Medellín. The city didn´t die. It transformed.

By 2008, the homicide rate had dropped to 2.5 a day, and by the end of 2015 it was lower than Chicago´s. In 2014, Medellín was named the “Innovative City of the Year” by the Wall Street Journal and was named the “Nobel of Cities.” In 2016, it was named “South America´s Leading City Break Destination” in the World Travel Awards. That’s a far cry from “Murder Capital of the World” only 30 years earlier.

I would like to think that the CUSC had something to do with this transformation.

Their lives revolved around selling drugs, making money, and conquering girls. I would insert Scripture into the conversations. 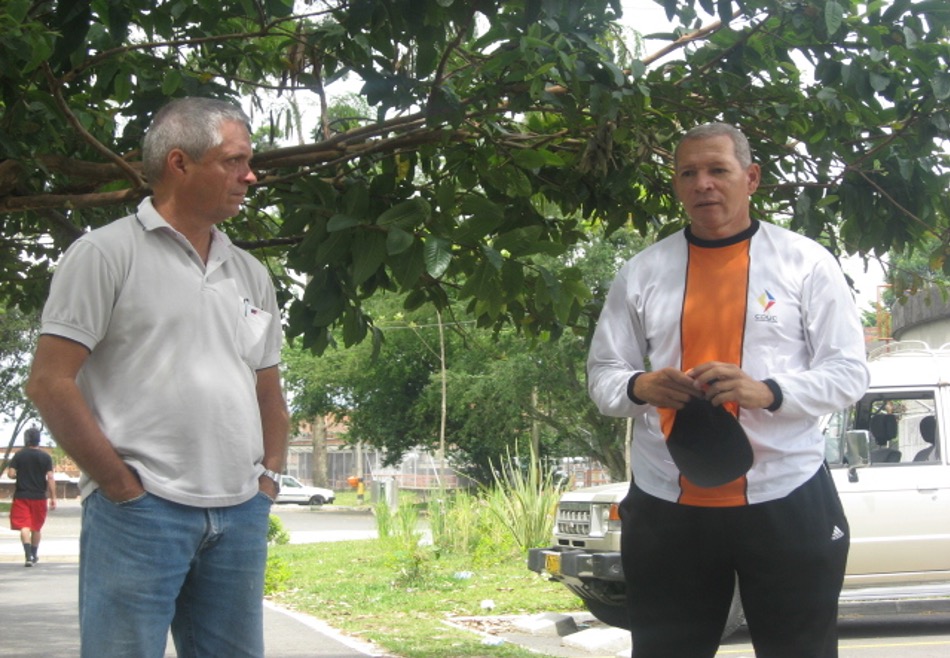 Marcos (left) and Alvaro today: an unlikely pair. Another unlikely pair? Their ministry, which combines playing soccer and making pastries. 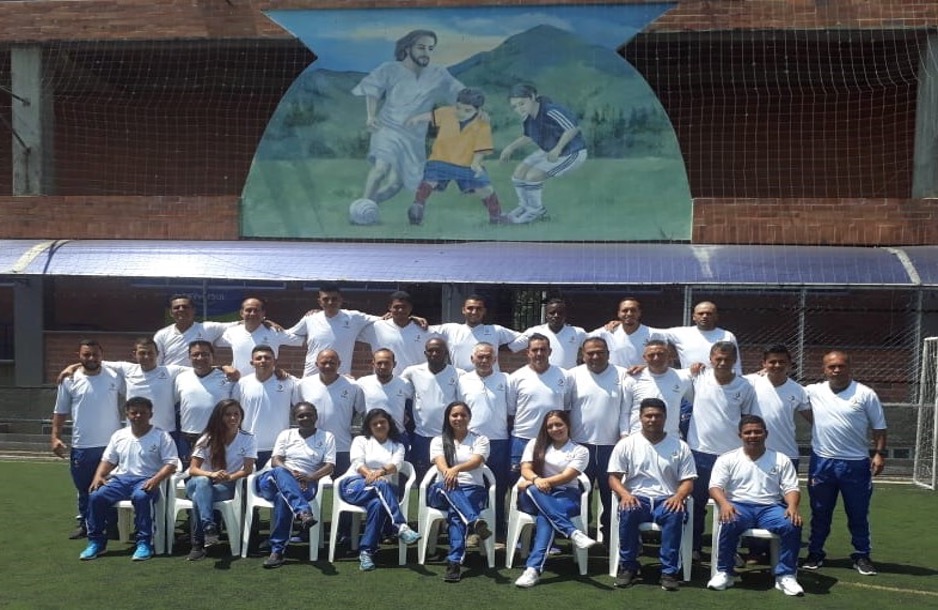 A CUSC team today at the venue created through Marcos and Alvaro’s work.

Religion and Sport (not the other way around)
Scroll to top