Religion and Sport (not the other way around)

I earned my doctorate from the Catholic University of America in Washington, D.C., studying how faith lives and breathes in society today at the School of Theology and Religious Studies.

A few years later, St Joseph’s College at the University of Alberta hired me to prepare undergraduate students to become educators in the local Catholic school system.

Shortly after my arrival, our College’s Dean, who was also a member of the University’s Faculty of Kinesiology, actively promoted a new course on sport and religion to be taught at the College—and I would be the one to teach it. I knew I could handle the religious content of the course and I trusted that my enthusiasm and decent knowledge of sport could enable my teaching of it. Yet I had much to learn.

The adventure has turned out both fun and enlightening. What began as a teaching endeavor has become the main thrust of my research agenda.

On the religion side, I had to focus my lens. I have a broad interest in religious studies but decided that this course would include elements of sociology of religion, spirituality and spiritual practices, and Christian teachings about sport. The academic study of faith and sport was new to me, but the practical connection between them was not. I had experienced them growing up.

Two personal recollections of sport and faith from my childhood stand out. First, my grandmother drove my entire family to a football stadium in Calgary to listen to Billy Graham—who, of course, had athletes speaking at his event. The second was hearing about Father David Bauer, who was a Catholic priest engaged in Canada’s Olympic hockey team. I reflected on these experiences, and they helped me understand practical, lived Christian faith—especially where sport is present.

On the sport side of things, I had much to learn academically (and am still learning). I began reading books on sport sociology, philosophy, and history, with a growing interest in sport’s historical connections to faith. As an academic religious educator, I wondered how Christians interacted with sport over the centuries.

Given these interests, I began completing research projects in this area. I’ve been especially drawn to three broad topics.

Sport can be a place for theological reflection—both theoretically and practically. In my work in this area, I try to engage seriously with past theological works and current movements in sport. The intersection produces great possibility, as long as sport itself is weighed fairly and critically. The connections I make among play, worship, and sport are not meant to degrade the Christian faith, but to challenge secularized assumptions of the human person (playing sport) and awaken people of faith to contemporary rituals and practices. With the book, Sport and Christianity: Practices for the 21st Century, my co-editors and I wanted to explore ways that sport can be a means of spiritual enrichment and growth while also acknowledging its potential pitfalls. A mix of theories and practices, we hope the text will encourage deeper spiritual engagement in sport and more serious questioning of its materialist assumptions.

My curiosity about how people live faith in sport led to a couple of studies. First, a research team I led asked fifteen-year-old athletes about how they engage spirituality or religion in their sporting participation; second, we tried to understand how educator-coaches in local Catholic schools experienced sport and faith coming together. Our subjects who were active in faith traditions were more likely to engage spiritual practices in sport. Further, our subjects used a variety of ways and means to engage sport spiritually. Athletes may employ traditional practices or hybrids with sporting ones, like silently meditating while taping an ice hockey stick. Coaches may do traditional things—use prayer before a game or see sport as a ground for moral training—and struggled with how to implement faith practices with athletes in an increasingly secularized world. The research supported how athletes in particular, when faced with sporting pressures, reach outside of themselves for comfort and confidence—here, relying on their Creator is psychologically supportive and keeps the sport in perspective.

My study of sport from theological and sociological perspectives led to a larger project. I have recently turned to the history of sport. Having not formally studied this sub-discipline, I didn’t have a firm grasp on the evolution of sport in the twentieth century and its connections to faith. For any Canadian, the first place to look is to ice hockey. As I worked on other studies, I wondered about a detailed history into the thought and work of Father David Bauer (1924-1988), who was a Catholic priest of the Basilian religious community and a prominent figure in my childhood ruminations on sport and religion. He became the founder of Canada’s National Ice Hockey Team, organizing the squad at three Winter Olympics (1964, 1968, and 1980). What makes Bauer particularly interesting is that he was a hockey philosopher, writing about the game and its place in Canadian society, and all the while engaged in the sport at the national and international levels. This book project is still a work in progress, and I think it will add layers to our understanding of sport and Christianity.

I feel uncertain about the sport itself, the present and the future—remember, sport isn’t my original field of expertise. There are serious problems within it, and so in my work I try to underline its possibility for good. Sport can build people up. That’s the necessary basis for people of faith to remain involved in these activities. When I teach and study sport, I try to keep that in mind. This isn’t just theoretical work for me. Sport and faith are lived experiences, ripe with possibilities to infuse the dignity of all people.

Sport can build people up. That’s the necessary basis for people of faith to remain involved in these activities. 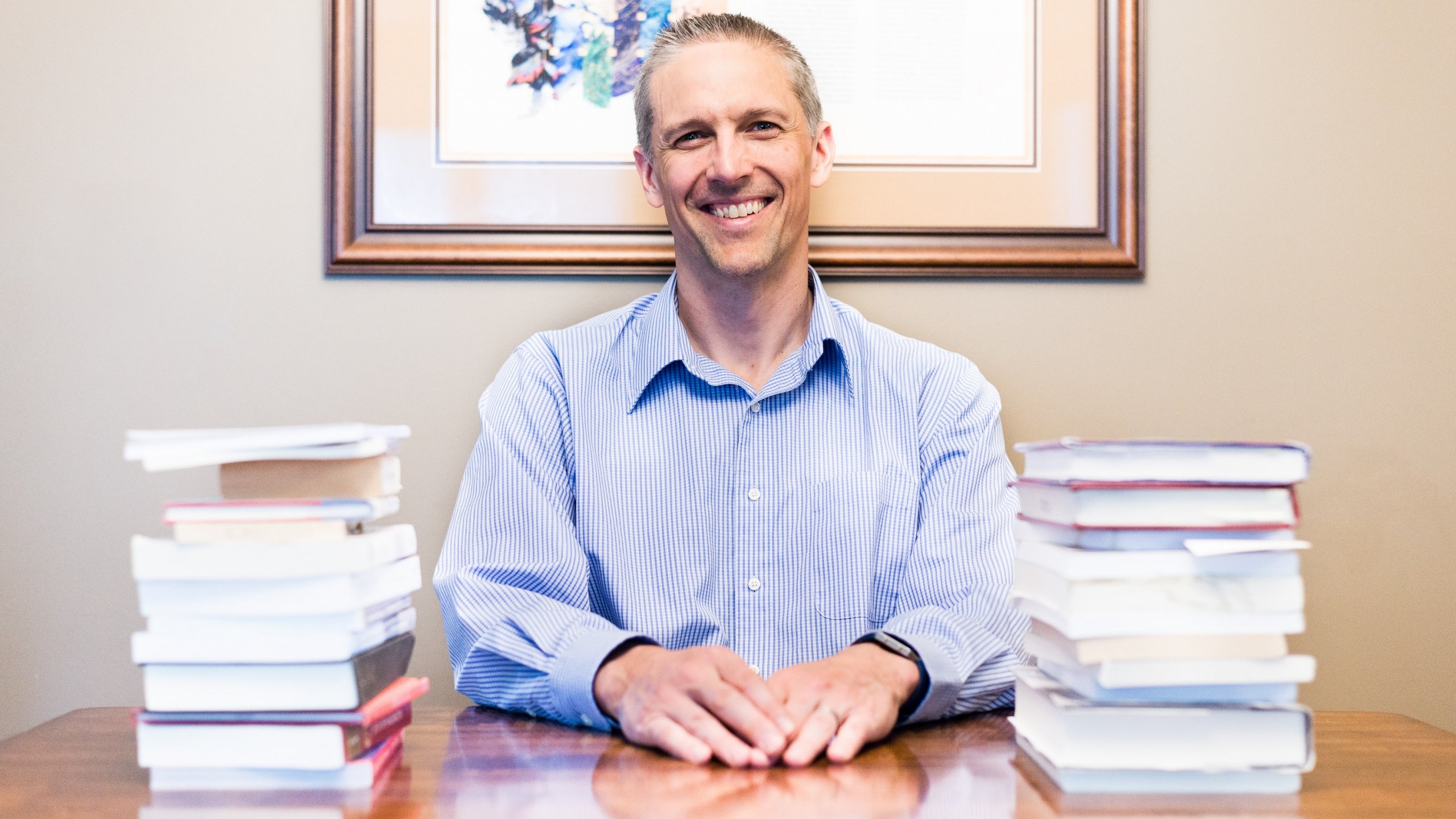 Look at those stacks of books! Matt Hoven of St. Joseph’s College at the University of Alberta is a true scholar.

On the Front Lines
Scroll to top