On the Eighth Day

The following excerpt comes from the introduction of Matt Hoven, J.J. Carney, and Max Engel, On the Eighth Day: A Catholic Theology of Sport (Cascade/Wipf & Stock: Eugene, OR, 2022), 1-2. Used with permission from Wipf and Stock Publishers: www.wipfandstock.com. Available for purchase in July 2022.

A banner at an Edmonton Oilers ice hockey game in the early 1980s announced, “On the eighth day, God created Gretzky.” For one very young Oilers fan, the sign declared something impossible, yet conceivably true. Could the Creator of the universe make all things in six days, rest on the seventh, and then create the greatest hockey player ever? Surely not, but Wayne Gretzky seemed heaven-sent. He had established a new record for most goals scored in a season. He played the game in unusually new ways, making passes that no one had made before and revolutionizing how players used the space behind the goal. Elsewhere on the ice, he inexplicably appeared in the right place at the right time; a trait learned from his father who sounded more like a mystic than a coach: “Don’t go to where the puck is, but where it is going to be.” In truth, a young fan could believe that God had created Gretzky on the eighth day, as was claimed on the banner unfurled at Northlands Coliseum in the 1980s.

Connections between sport and religion don’t end with Gretzky: consider Doug Flutie’s last second “Hail Mary” pass; Tim Tebow’s prayerful, kneeling gesture in the end zone; or baseball players making the sign of the cross before batting. Some athletes write biblical passages on their basketball shoes. Others privately carry a rosary in their athletic bag or light a candle to St Sebastian, the patron saint of athletes, as has the most successful women’s gymnast ever, Simone Biles. Many coaches endorse pregame prayers, while fans complete private rituals imploring divine assistance. Religious organizations, like the Catholic Church, have become well-known for their institutional commitment to sport in their schools and colleges. It appears that the combination of religion and sport is as commonplace as that young Oilers fan had hoped.

What is one to make of these instances of religious expression in sport? This book provides a critical overview of how religious thinking can engage the phenomenon of sport and, with the help of theological knowledge and values, promote what is best in sport for the benefit of its participants. We offer a contemporary theological framework that gives a richer understanding of sport for people of faith, provides deeper reflection on the meaning of sport for the nonreligious reader, and tacitly argues why religious believers like Biles and others should remain involved in sport now more than ever.

We offer a contemporary theological framework that gives a richer understanding of sport for people of faith, provides deeper reflection on the meaning of sport for the nonreligious reader, and tacitly argues why religious believers like Biles and others should remain involved in sport now more than ever. 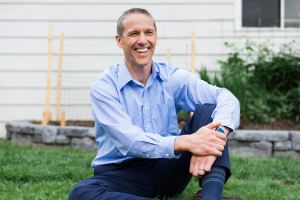 Matt, a lifelong Edmonton Oilers fan, after being told that Wayne Gretzky wasn’t actually created by God on the eighth day.